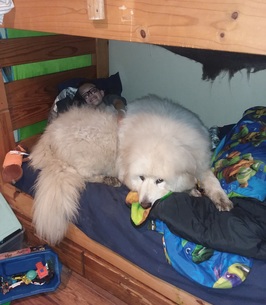 Optimus Prime Robinson, 6, of Seville, passed away unexpectedly on Monday, May 24, 2021. He was born October 6, 2014, & arrived at his furever home on January 15, 2015.
Optimus was the start of his family's puzzle as he was bought as a housewarming gift to his human brother Bradyn. He was the poster child for the perfect family dog, wherever you were he was almost always in the eyesights distance. In his prime, he made it a goal to introduce himself to the whole road of neighbors on Buffham Road & not even his shock collar could stop his social addiction. One look into that handsome face & you just couldn't stay mad at him.
Aside from being a "secret" adventurer, his other favorite past-times were swimming in his pond with his family, sitting front & center for family movie night, laying in the cool snow while his brother & cousin played nearby, begging for food & sleeping on "the job". While Optimus didn't enjoy bath time he couldn't pass up the chance for a free car ride to see his aunt Mary at Fancy Paws Pet Grooming. Some nicknames he acquired over the years include Optimosis, Fluffaluffagus, Fuzzy Wuzzy & Majestic Wingman (thanks mom).
Optimus was one of a kind, helped us grow as a family & was always there to comfort us more times than we can count. He was very good at playing the "Great Protector" (especially during the night while the rest of his family was asleep he would often let out a few barks to let us know he's still on guard). With his charismatic charm, there wasn't one person he met that's heart was left untouched. The day before his passing was spent wading in the pond with his family, basking in the sun & eating steak with his dog food for dinner. Our family has cried nearly enough tears to equate to his lifetime of drool, he will be greatly missed & never forgotten.
Optimus is survived by his 3 fur siblings: his special bonded sister Nova (German Shephard/Newfoundland) who was only 2 days younger than him as well as his brother & sister Cash & Amaya (Great Danes). His human father & mother John & Ashley Robinson, his cousin Aubrey, and his brother & best friend Bradyn Robinson.
The family would like to thank Optimus for all the signs he's been leaving us since his passing, All Creatures Veterinary Clinic & Lodge for the exceptional care they provided him over his 6 short years as well as Unforgettable Tails pet cremation for their professionalism, respect & compassion shown to our family in this very difficult time.
"God once said,
I need someone strong enough to pull a cart but
gentle enough to love a child
smart enough to protect his master
and passionate enough to love his family
someone with so much love
they can lift the spirits of a broken heart
so God created the Great Pyrenees"